Within EuroPHit, a certification scheme for stepwise retrofit with Passive House components was established. The focus of the scheme was on the creation of an EnerPHit Retrofit Plan (ERP) for all energy refurbishment measures, to be implemented independently over a given period of time. Only through this approach can a satisfying result be achieved for stepwise retrofit projects.

The certification scheme is based on the existing “EnerPHit” criteria for energy retrofit with Passive House components. The core of EnerPHit is formed by different sets of component requirements for each of the seven global climate zones. As an alternative option, the building can adhere to a climate dependent limit to heating and cooling demand, giving more flexibility for the selection of suitable components.

In the final stage of a stepwise retrofit, the same requirements as in the existing EnerPHit criteria have to be met. In most cases, this will mean that in all retrofit steps, the requirements for Passive House components will be fulfilled for all implemented measures.

The certification process will typically start before the first retrofit measure is undertaken. At this stage, the concept for all retrofit measures that will be carried out in the future is to be laid out in the EnerPHit Retrofit Plan (ERP). This concept will define expected efficiency standards for all measures. Special attention has to be paid to connection details between two adjacent construction elements that will not be renovated at the same time. For these, the position of the airtightness and insulation layers has to be defined, and the connection has to be planned for the interim state, when only one of the components has been renovated, and for the final state. In the final stage, an airtight connection with minimized thermal bridge effects has to be proven. Moreover, interdependencies between two measures have to be clarified (e.g., it is not permissible to improve the airtightness without installing a ventilation system or without insulating the building due to moisture issues). The concept should also contain a schedule for heating system renewal at a suitable time.

The ERP can be submitted to a Passive House certifier, who will check the coherence of the described step-by-step process and the fulfilment of the criteria. This gives the building owner the guarantee that the EnerPHit Standard will be met if all steps are carried out as described. The ERP can be certified after the first step has been completed and verified by the certifier.

Once all steps have been completed, a “normal” EnerPHit certificate will be issued. 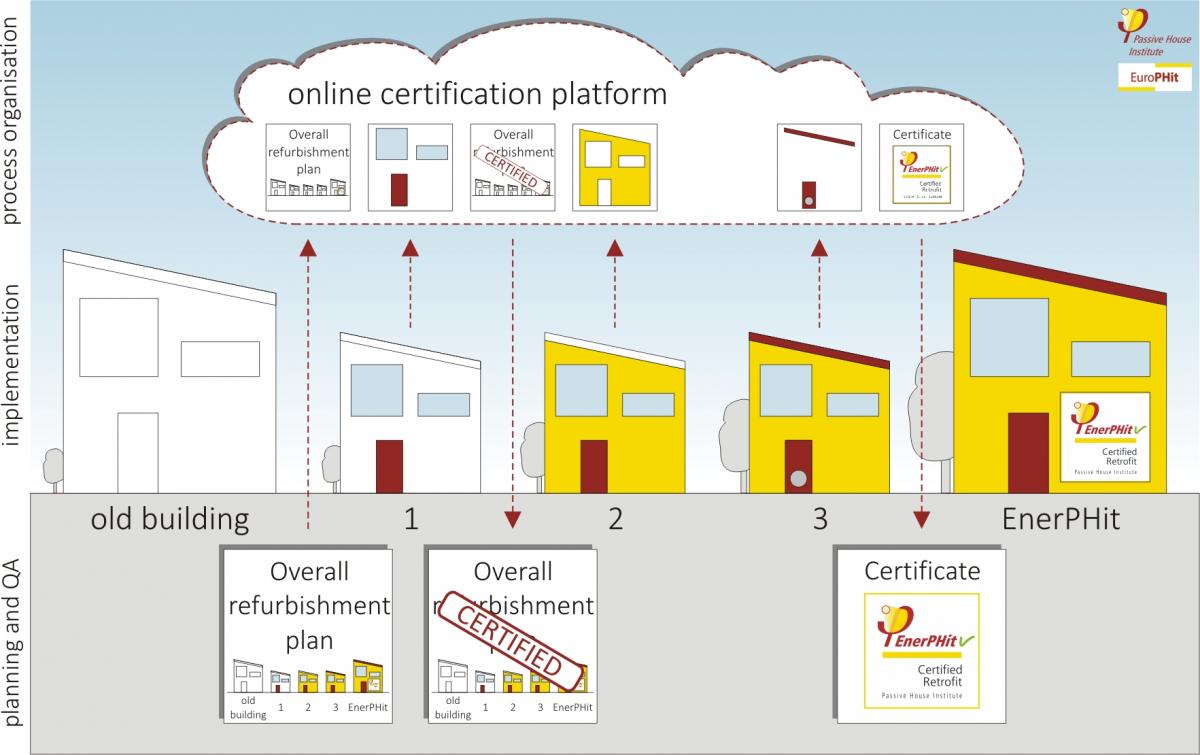